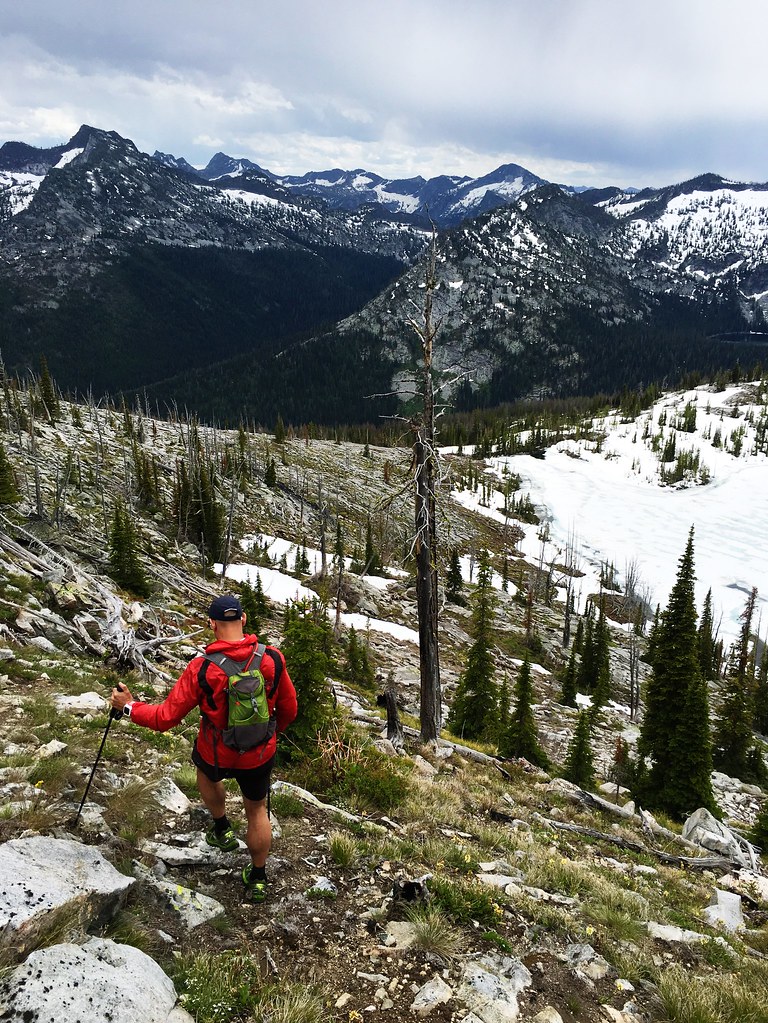 What was supposed to be a final long run – up one canyon and down another in the Bitterroot Mountains – before a 55K race turned into a day of navigating cold stream crossings, flattened forest and snow-covered trail last month.

While trying at times, the 27 miles between Fred Burr Creek and Mill Creek northwest of Hamilton offered plenty of Selway-Bitterroot Wilderness beauty.

After a couple of days of trying to check trail conditions that yielded few facts, two friends and I set out about 7 a.m. from the Fred Burr trailhead.

Not even half a mile down the trail to the west, we were surprised when a young bear fled up the brushy slope next to us. While it was the only wildlife we’d see all day, we’d find plenty of evidence other animals were around.

The trail continued above Fred Burr Creek on an old forest road, then diverted to the south side of it around private property and rejoined it again to cross the Bitterroot National Forest boundary at a gate.

From there, we continued up to the dam at the lower end of Fred Burr Reservoir at about 4.5 miles, the smooth surface of the water reflecting the surrounding mountains and clouds above. 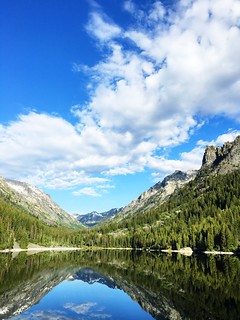 After a short break, we followed the trail through the trees on the north side of the reservoir, reaching the first of four creek crossings at its upper end. Determining there was no way to stay dry, I forded the cold water and my friends soon followed.

On the south side of the creek, we came to our first downed trees of the day. While getting past them slowed us slightly, it was nothing compared to what we’d find farther up the trail.

Just before entering the Selway-Bitterroot Wilderness at about 6 miles, one friend who was rehabilitating an injury turned around. He planned to shuttle the truck to the other trailhead, go for a short run there, then wait for the two of us who were continuing on.

After the wilderness boundary, it was a short distance farther up the trail to the next creek crossing, which was wider but shallower than the first. Back on the north side, we occasionally encountered downed trees as we made our way up through the forest.

About 6.75 miles up, the canyon opened and revealed views of the surrounding ridges at the first of several meadows left from fires in the late 1980s. 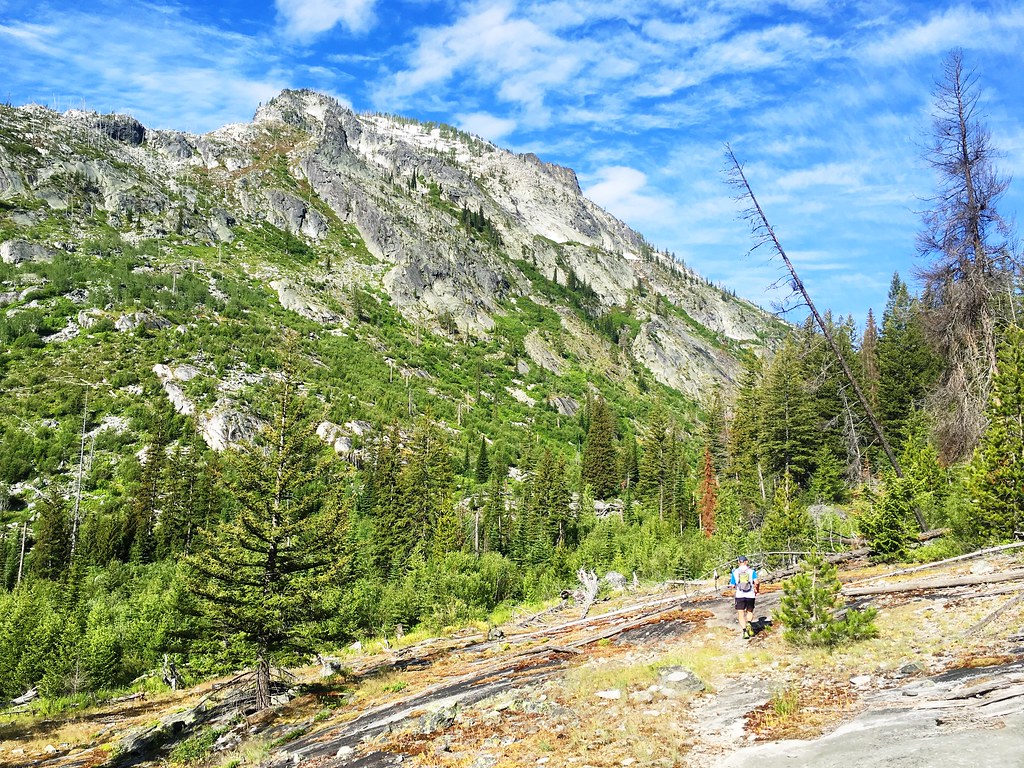 The next couple of miles were made easier by the meadows, though we still found a few downed trees in the forest. We also found two large, fresh piles of bear scat and tracks in the trail.

After two more creek crossings – the first cold and deep to the south side, and the second high and dry on a log back to the north side – the rock wall of the Bitterroot Divide rose directly to the west of us. 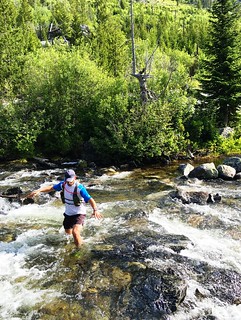 At about 9 miles, we turned south with the creek and canyon and entered the forest again.

Soon, we found ourselves making our way over and around downed trees, zigzagging across the trail. At times, we stood on logs stacked 20 feet above the forest floor, and we twice waded up the creek because it was easier to go under the trees spanning it.

By the time we were through what clearly was a swath of forest flattened by wind – possibly in the big storm last August – we had covered just 2 miles in 1 hour 35 minutes. While we knew we’d have a couple of slow miles over the pass ahead of us, we weren’t turning back. 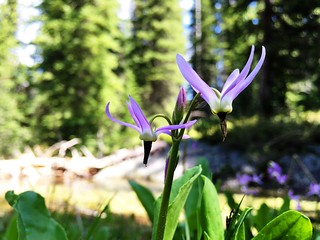 After a break along the creek to eat and refill our hydration packs, we started up the canyon again through alternating stretches of forest and meadow.

At about mile 12, we turned up the western wall of the canyon and ascended the steep switchbacks to Fred Burr Lake, reaching snow as the trees thinned. After nearly a mile, we arrived at the lake, set in a rocky basin and still frozen. 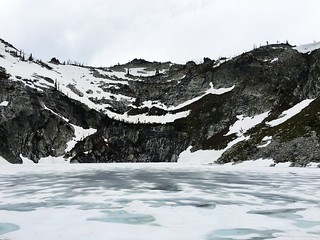 Standing near the lake, we could see mountains for miles around – as well as the flattened forest below.

The next section was the riskiest of the day as we continued west up a steep ridge to about 7,800 feet and traversed a snowy shelf to the south, the trail buried beneath us. The angle of the snow increased as we approached another ridge, and we decided it would be safest to scramble up and over the rocks above us rather than continue across to a notch where we thought the trail must be. 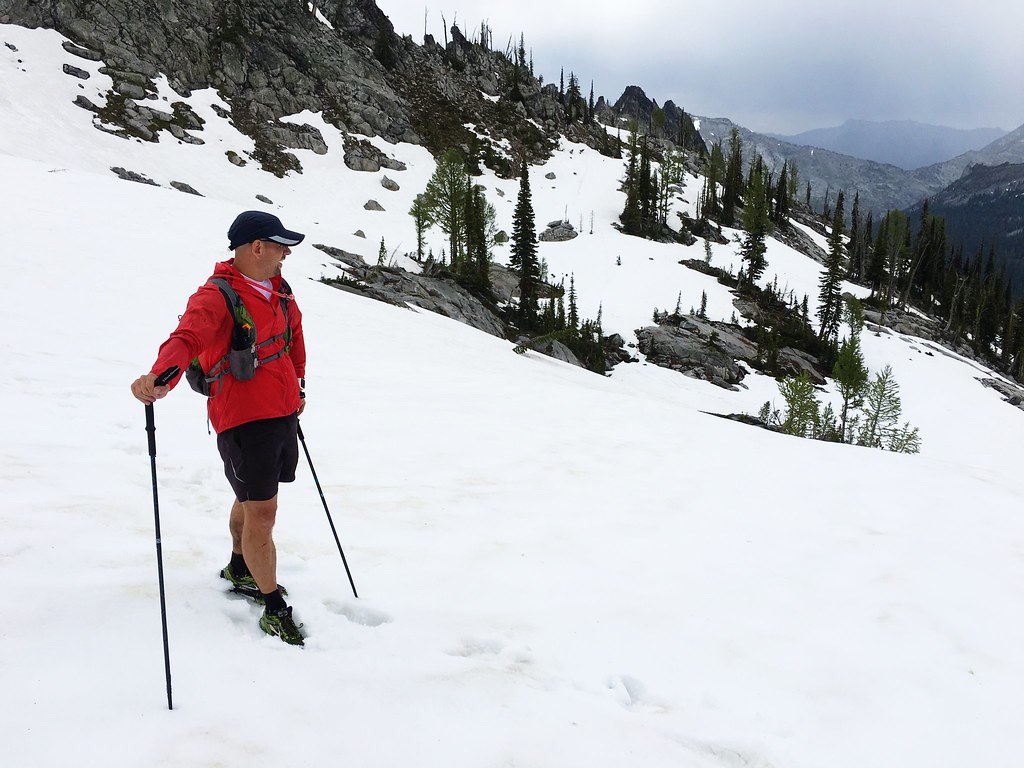 Once over the ridge – in the Mill Creek drainage – we were on rocky ground again, but saw no clear trail. We made our way south, down to the shore of the frozen Lockwood Lake at about 14 miles, then continued across moose-tracked snow and down farther to the melting Heinrich Lake. 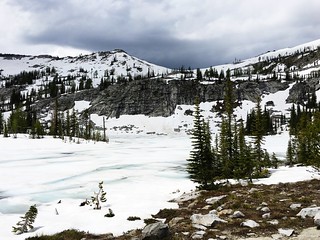 At Heinrich Lake, we could see the open water of Mill Lake below us to the south, across boulder fields and rocky slabs interspersed with brush. A topographic map saved on my cellphone, however, showed the trail going over another snowy shelf.

Not having seen the actual trail for a while, we decided to continue off it and down the rocks.

After hopping across the lower part of a waterfall and descending through beargrass, we reached the trail again at about 15.5 miles, just above the junction leading to Mill Lake. We stopped here to eat and refill our water again, then started east down Mill Creek. 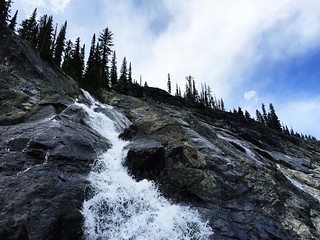 The clouds above us darkened and it rained for a while, but the next few miles went by much more quickly as we were able to really run again.

At about mile 18, we slowed, however, as we started to encounter a lot of trees across the trail. Thankfully, it was nothing like the flattened forest of Fred Burr Creek, and four hikers we passed told us the trail would clear when it crossed out of the wilderness with five miles to go.

Near mile 23, my phone found a cellular signal and buzzed with text messages when we stopped in a rocky clearing left by the fires of 2000.

Our friend who was waiting at the trailhead was concerned – justifiably, as we had been out for 10 hours and were long overdue. We were all right, we assured him, but would likely be another hour.

With the sun shining again, we continued down the trail, skipping a stop at the small cascade and pool with three miles to go. After crossing Mill Creek on a new bridge, we quickly covered the final mile to the trailhead, glad to see our friend and the truck. 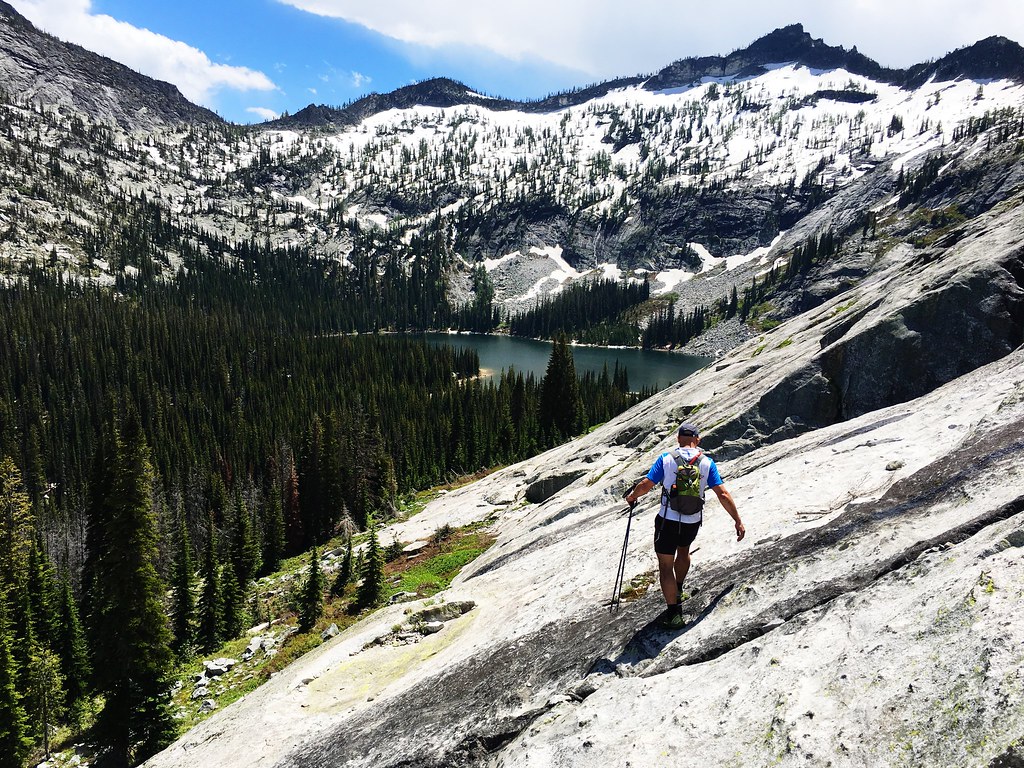 In the end, we covered 27 miles with about 4,500 feet of elevation gain in 11 hours. On the way home, we stopped for dinner and a beer – and to explain our delay.