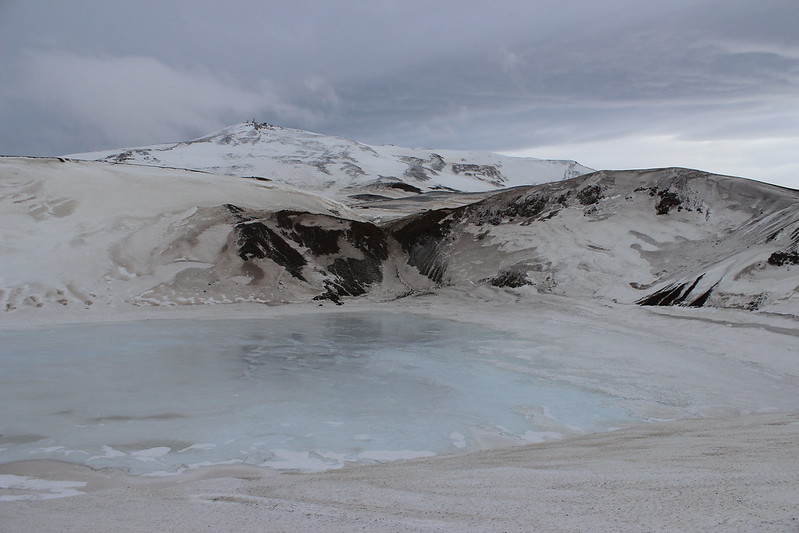 Our plan in traveling to Iceland in February was to cross-country ski, and since there was no extra fee on our flights we packed our own gear. It wasn’t to be, however.

The six-hour drive northeast from Reykjavík to the Mývatn area – our first destination outside of the capital – looked promising. The mountains and valleys along the way were white, and a stop at Goðafoss provided a frosty sight. 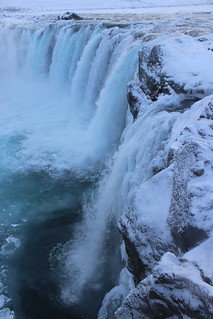 At our guesthouse just south of Reykjahlíð, we were told that while winter had been snowy it also was much windier than normal. In the lava field across the road, sharp, black rock was covered by only a thin layer of crusty snow. In fact, there was more on the ground the last time we visited.

While our skis stayed packed in our SUV, there were plenty of other options for getting out around Mývatn in winter. 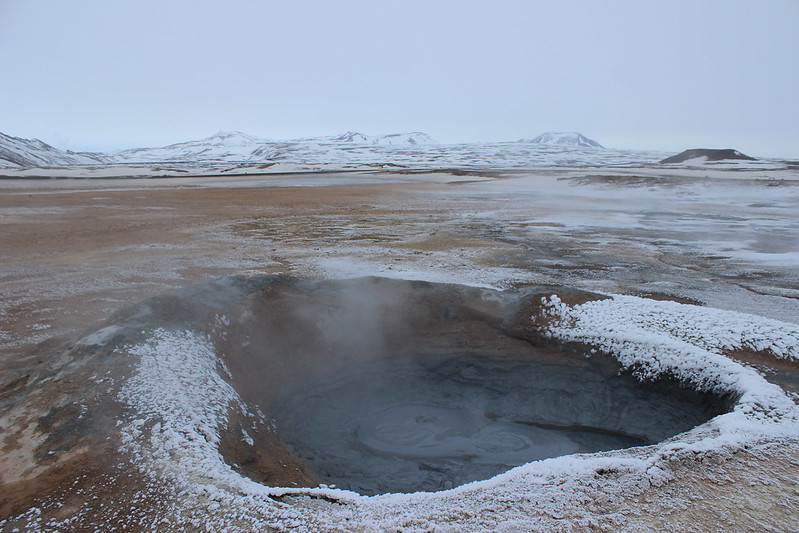 With visibility fairly low due to clouds and snow during our full day in the area, we drove about 5 kilometers east of Reykjahlíð over a pass to Hverir, a geothermal area at the foot of Námafjall.

In both sight and smell, Hverir is similar to some parts of Yellowstone National Park – a colorful and sulfurous landscape of bubbling pools and steaming vents. A trail loops through the area and up the mountain.

Next we drove another half a kilometer east and about 7 kilometers north to see the Krafla caldera. With the weather deteriorating, however, we turned back at the power station there and spent the rest of the afternoon at the Mývatn Nature Baths, soaking in the outdoor pool as snow fell around us. 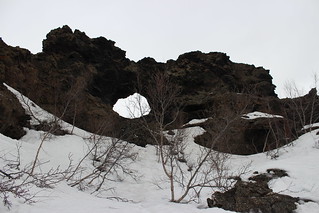 The next morning was overcast, but the clouds were high so seeing out wasn’t a problem.

We started our day about 6 kilometers south of Reykjahlíð at Dimmuborgir, where trails wind among lava formations. The snow was solid and the trails were marked with stakes, making walking easy. The name of the area translates to “dark castles” and that’s how the looming lava formations appear.

Next, we drove northeast to the Krafla area again to see the Víti crater, pictured at top. Just north of the power station, we parked on the side of the road where it was apparent plowing had stopped. As we started hiking up the snow-covered surface, the wind increased some and the sun was breaking through the clouds.

In the 2 kilometers to the crater, the wind grew stronger, and by the time we arrived it was blowing too hard to continue around the rim. Any time we turned into the wind, our faces would get sprayed with a mix of ice and rock bits.

The hike up still was worth it. The 320-meter-wide crater was created in an eruption in 1724 and now is filled with deep blue water. In February, the surface appeared to be frozen solid.

The hike back down to where we parked – into the wind – took nearly twice as long as going up, and we came to a standstill a couple of time just trying to stay upright. 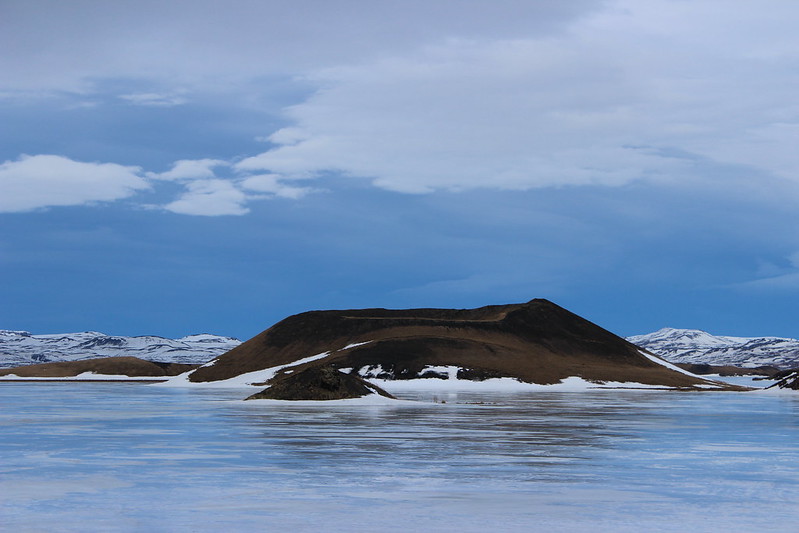 With plenty of the day left, we returned to Mývatn and drove around the lake to the town of Skútustaðir. The wind was less strong there, and we hiked a trail among the pseudocraters along the shore. These small craters were formed by gas explosions as lava reached the lake. 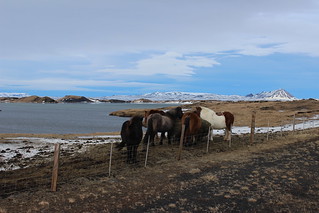 As we drove back to our guesthouse for the night, we came upon a group of Icelandic horses in a fenced-off field just outside Skútustaðir. These shorter purebred steeds have a shaggy appearance befitting the country.

At times that night, the wind gusted to 35 meters per second, or 78 miles per hour, and rattled the roof of the guesthouse. For reference, a category 1 hurricane has minimum sustained winds of 74 mph. By morning, it had died down for our two-hour drive back west to Akureyri, Iceland’s second largest city and the second stop on our itinerary.