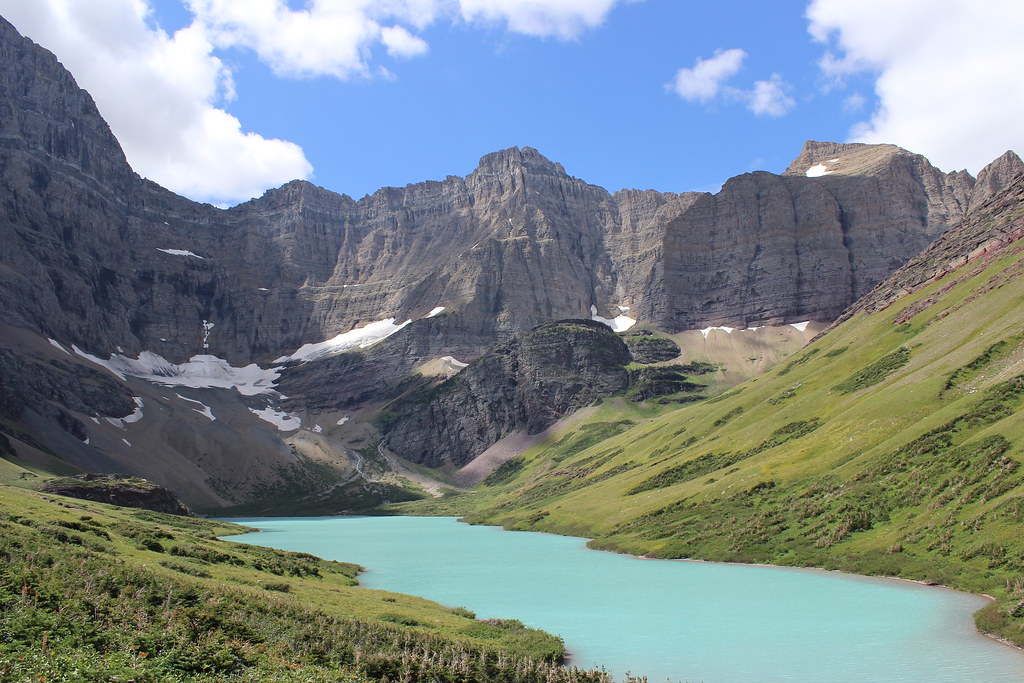 After several years of point-to-point backpacking in Glacier National Park, we returned to day hiking last summer, largely due to the forecast.

While a rainy day isn’t out of the ordinary for our late-July trips to the park, the forecast this year was for much more precipitation. And it delivered – a couple of our hikes were the wettest we’ve been on outside of Olympic National Park, Scotland or Iceland. Fortunately, we’ve learned that good rain gear – jacket, pants, pack cover – is worth the expense.

This year, we also visited parts of the park that we don’t usually get to – the North Fork of the Flathead, the less crowded Poia and Cracker lakes in the busy Many Glacier area, and Firebrand Pass outside East Glacier.

It was the first time I’d been to the North Fork, where we camped at Bowman Lake and made the obligatory stop at the Polebridge Mercantile for baked treats. On the east side of the park, we camped at Rising Sun, which along with the St. Mary campground we’ve always found to be good staging areas for getting out. 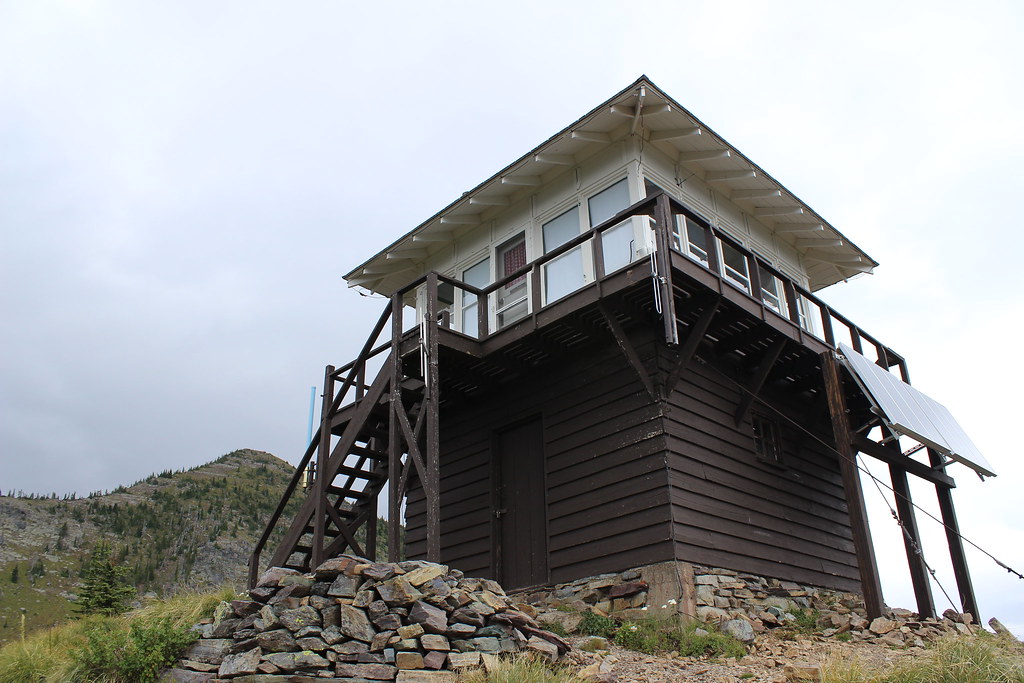 The morning after arriving at the Bowman Lake campground, we hiked to the Numa Ridge Lookout, which provided good views over the North Fork despite gray clouds overhead.

From the boat launch, the we followed the trail northeast along the shore of the lake for a relatively flat three-quarters of a mile, then turned north at the Numa Ridge junction. From there, the trail rose to a small, forested lake – which we didn’t see until we were above it – at about 3.5 miles. 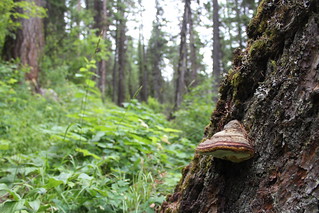 After the lake, the trail climbed the ridge in earnest, on increasingly shorter switchbacks. As we approached the lookout, the trees grew smaller and the views opened up.

At 5.7 miles, we arrived at the lookout, on a grassy, 9,960-foot high point that offered views of the North Fork Valley below, the Whitefish Range to the west and, eventually, the Livingston Range above the top of Bowman Lake. 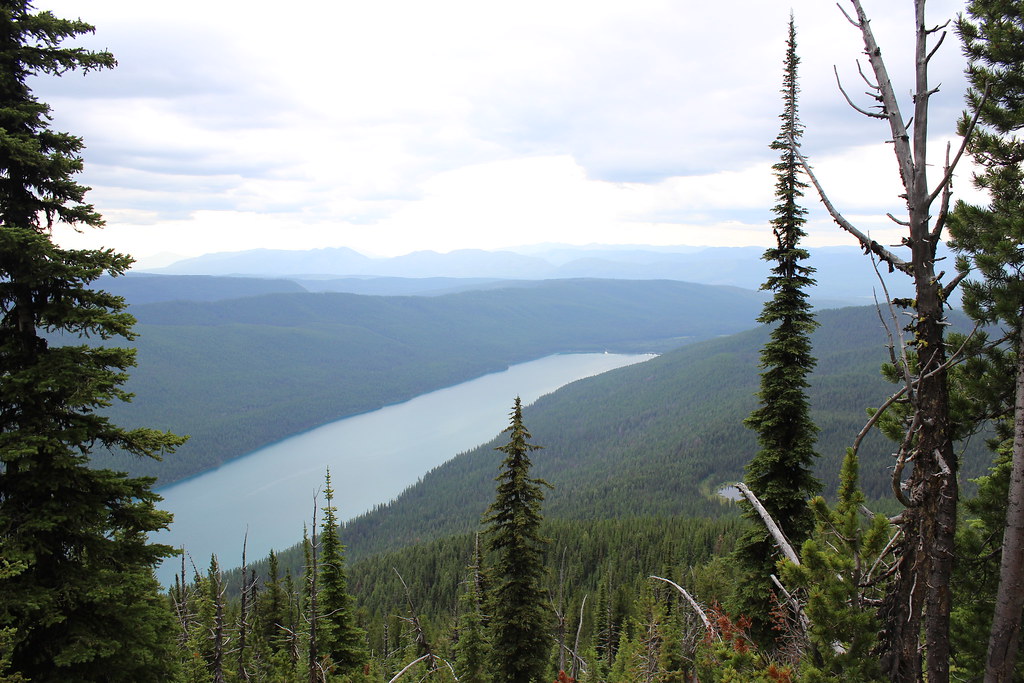 Light rain began as we ate and took photos, so we turned back downhill. At the small, forested lake, the rain began to fall harder and thunder boomed overhead, so we picked up our pace back to camp.

Here are more photos from Bowman Lake and the Numa Ridge Lookout. 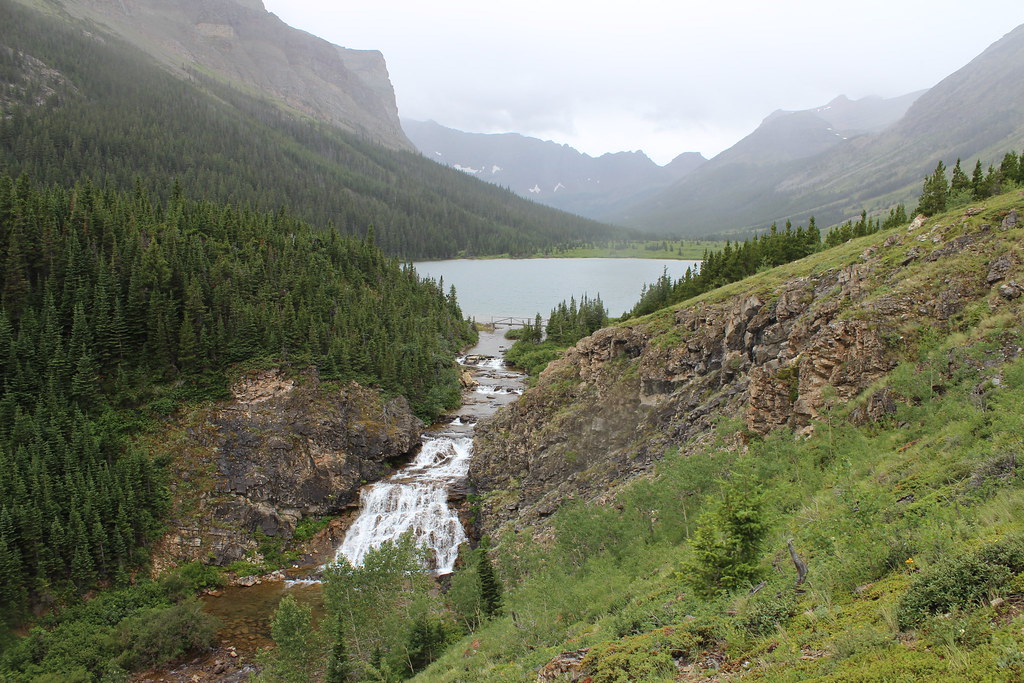 After a second night at Bowman Lake and a day crossing the park and setting up camp at Rising Sun, we decided to hike to Poia Lake from the Many Glacier area.

From the road into Many Glacier, two trails lead to Poia Lake, connecting near Swiftcurrent Ridge Lake. Since we were starting in hard rain, we chose the shorter cutoff trail that begins next to the Many Glacier entrance station.

From the entrance station, we climbed steeply and straight to the northwest for about 1.1 miles, through aspen stands and wildflower meadows, then met the longer trail from the Apikuni Falls area. At the junction, we turned northeast, passing Swiftcurrent Ridge Lake and crossing the ridge itself about three-quarters of a mile farther. 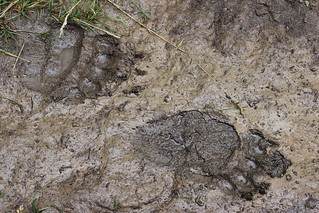 From the forested ridge, we switchbacked north down the muddy trail to Kennedy Creek, where we crossed paths with a couple of hikers from the East Coast and came upon a relatively fresh set of bear tracks at about 2.75 miles. As they had never encountered a bear before and were planning to hike farther than us, we advised them to be noisy.

At the creek, we turned west and climbed again, through a boulder field and back into the trees above a bend in the creek to the outlet of Poia Lake at about 4.5 miles.

We stopped for a few photos, but didn’t stay long because of the the rain – and there’s something about hiking with your hood up after just seeing bear tracks …

Trailhead: We started from the Many Glacier entrance station, about 7.5 miles southwest of Babb on Many Glacier Road. Another trailhead, which also provides access to Apikuni Falls, is about 3 miles farther into the park. 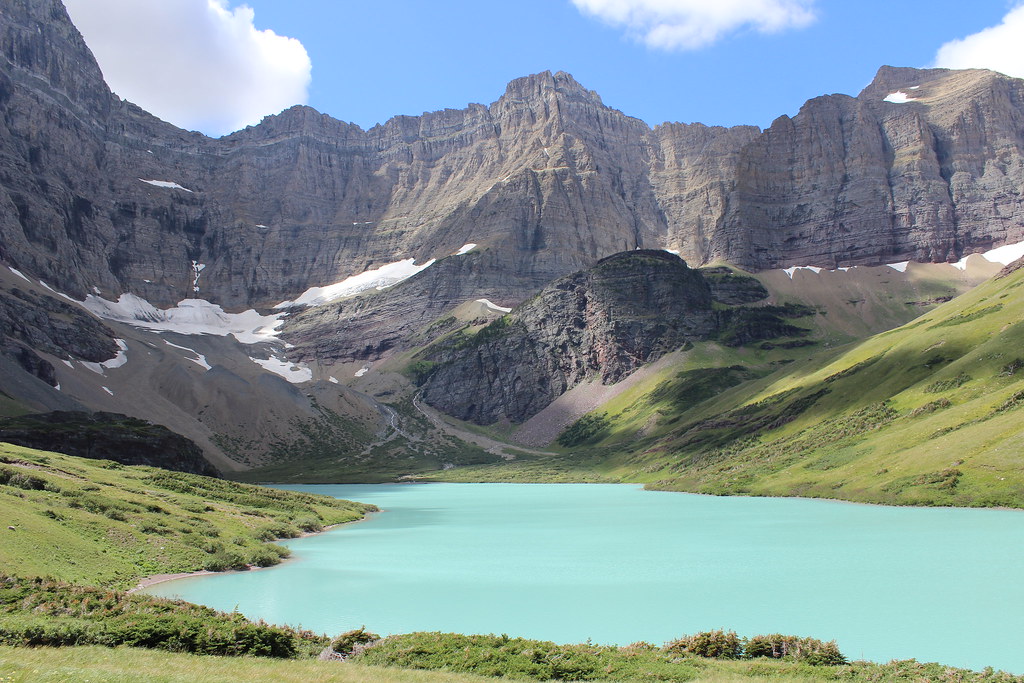 Mostly sunny weather the next day was the best of our trip, so we chose the longer hike to Cracker Lake, one of the most well-known lakes in the park because of its striking turquoise water.

While the fairly popular trail wasn’t as crowded as the High Line or Grinnell Glacier, the dozen or so hikers we encountered were the most we saw on any outing during our trip.

We started west from the Many Glacier Hotel parking lot, passing a turn to Piegan Pass shortly after leaving and dropping to the junction with the Cracker Flat loop at about 1.5 miles. This first section was well-trod by horses, so watching where we walked was necessary, but it also provided views across Lake Sherburne to Altyn Peak and Apikuni Mountain. 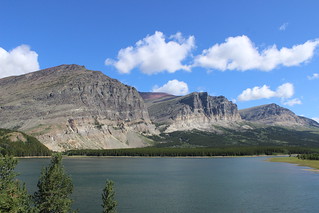 Past the Cracker Flat junction, we switchbacked south up into the forest, with occasional openings in the trees offering glimpses of Swiftcurrent Lake and Mount Wilbur. At the top of the switchbacks, we continued climbing above Canyon Creek, eventually reaching a crossing at about 3.5 miles.

After the crossing to the east side of the creek, we continued up the valley as the forest thinned and the trees grew shorter. At about 5 miles, we came out of the trees and got our first real view of the lake, Siyeh Glacier and Mount Siyeh above it and Allen Mountain on the west bank of the creek.

Out in the open, the wind picked up, so we stopped briefly for Jen to fly a kite, then continued along the bluffs above the east shore of the lake. 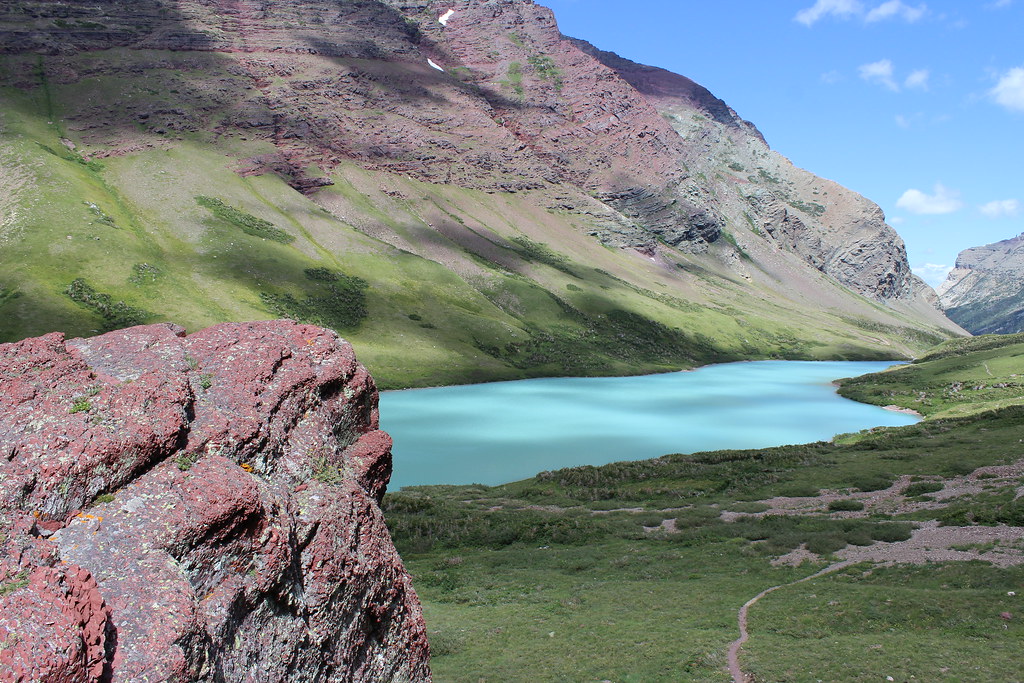 At about 6 miles, a rocky outcrop above the campground offered a place to stop and eat, and views all around. A trail down from the camp allowed us to explore the shore at the top of the lake and see the milky turquoise water – created by suspended silt from Siyeh Glacier – up close.

After backtracking to the trailhead, we took advantage of Many Glacier Hotel’s Swiss Lounge, stopping for beer and an appetizer before driving back to camp. 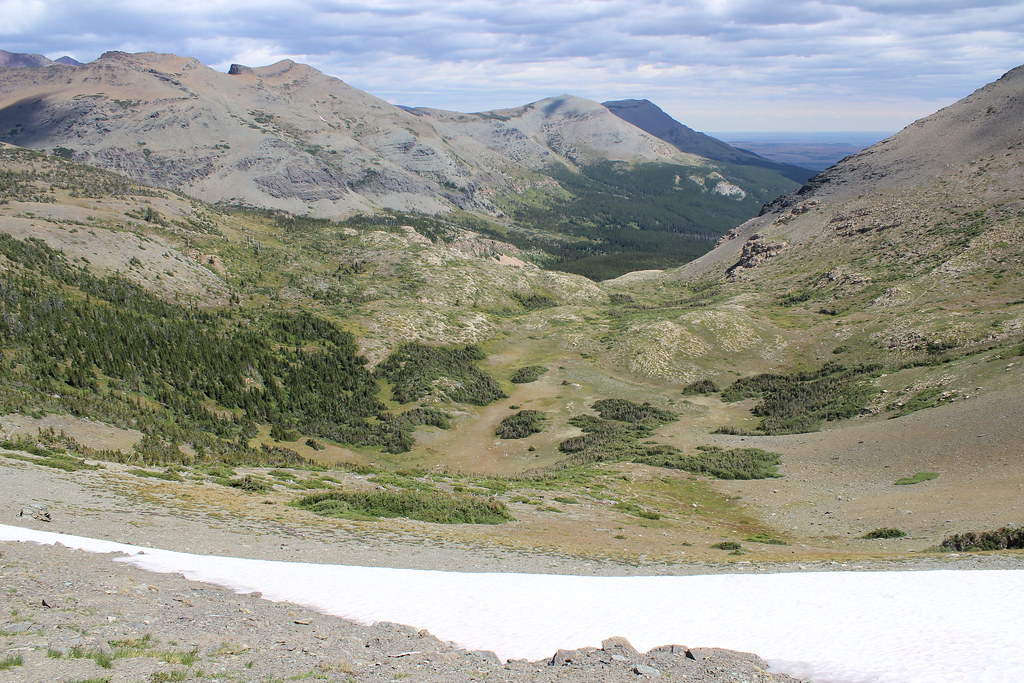 On our way home the next day we drove around the southern border of the park, stopping along U.S. Highway 2 and the train tracks of the Hi-Line west of East Glacier to hike to Firebrand Pass.

Aside from a handful of train whistles and the whipping of the wind at the pass, the hike was the quietest of our trip. We saw nobody along the trail, but later learned one of the two other vehicles at the trailhead belonged to friends.

After crossing the tracks, we passed through a fence marking the park border and hiked steadily uphill to the northwest through grassy fields and aspen stands. 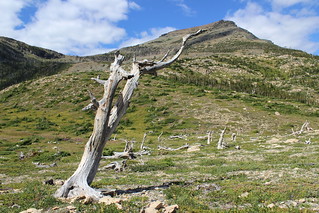 As we rounded the north flank of Calf Robe Mountain, we left the thick vegetation behind, crossed a small snowfield and continued up the trail into a subalpine basin above the Railroad Creek drainage. Ghostly white snags – remnants of the 1910 fires that gave the pass its name – stand where the final switchbacks begin.

After traversing talus and a longer snowfield, we reached the 6,951-foot pass between Calf Robe and Red Crow mountains at about 4.7 miles. Just over the pass, the Ole Creek drainage opened up with views of the Barrier Buttes and beyond. 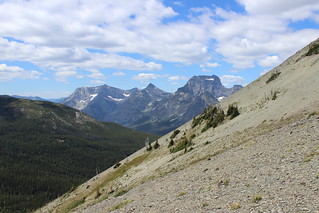 A long drive back to Missoula ahead of us, we turned back here rather than continuing on.

Distance: About 9.5 miles round trip.

Trailhead: The trail to Firebrand Pass begins at a small, unmarked pullout along U.S. Highway 2 about 6.5 miles west of East Glacier or 5.2 miles east of Marias Pass.