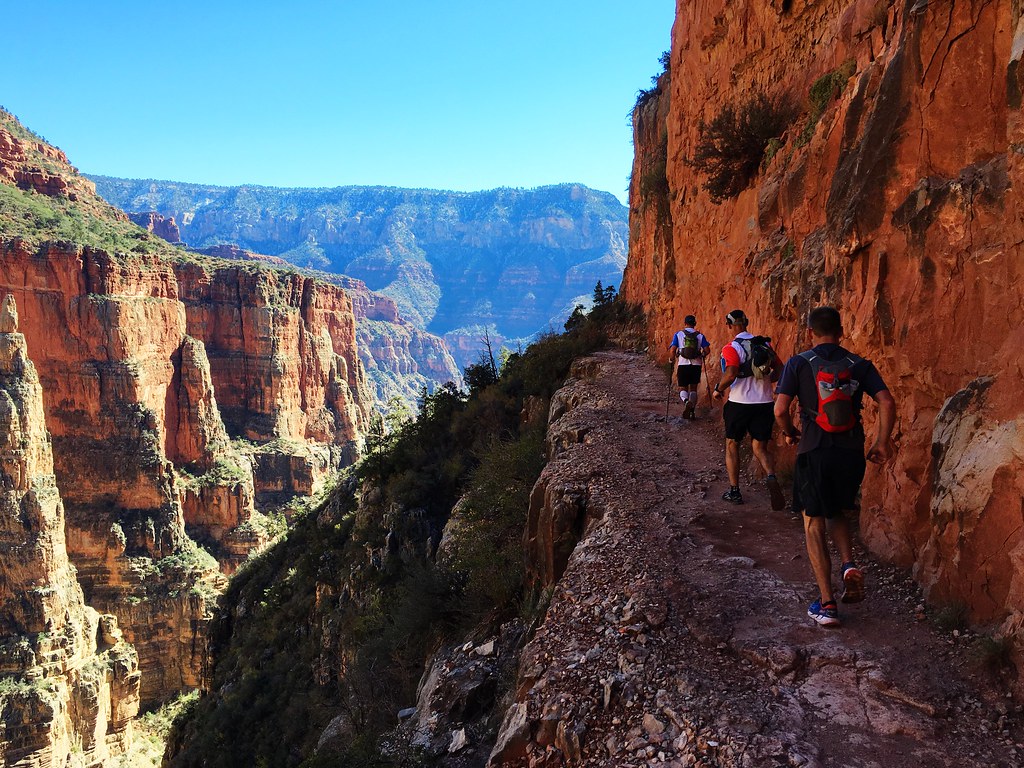 As we ran over the South Rim of the Grand Canyon in the dark early last November, I knew better than the rest of the group the risk presented by patches of packed snow and ice left from a storm earlier in the week.

The others arrived at the canyon by van the night before after flying from Missoula to Las Vegas, while Jen and I drove south and spent most of the week there hiking and sightseeing. Two days before the run – the morning after it snowed – it was clear that a slip or a step too far to the side of the South Kaibab Trail could result in a fall down a cliff.

I don’t think snow was on anybody’s mind back in Missoula months earlier, when we received the invitation to run the well-known double crossing of the canyon by email. Certainly, the distance (about 46 miles), the elevation gain (more than 10,000 feet), heat and water availability were.

Fortunately, the snow and ice lasted only a few switchbacks into the run, and the worse trail conditions higher on the North Rim were encountered at midday.

In the end, everybody made it out of the canyon safe – some completing the full R2R2R, some going Rim to River, some turning around early and one getting a ride back from the North Rim. 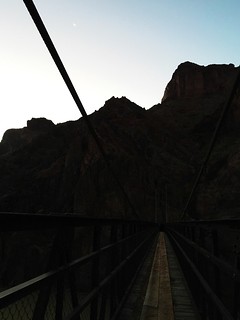 After being dropped off about 5 a.m. at the intersection of Desert View Drive and Yaki Point Road, where a gate keeps private vehicles from reaching the South Kaibab trailhead, we set out by headlamp.

About half a mile beyond the gate, we entered the canyon at 7,260 feet.

At Skeleton Point about 3 miles down to the north, another runner and I found ourselves out ahead of the main group with a faint glow backlighting the top of the canyon to the east. I had never met him before and was concerned about the pace the rest of the day, so slowed a bit in the hope of letting the others catch up.

The other runner pulled away as the bottom of the canyon grew lighter, and I was on my own when I stepped out of the tunnel onto the Black Bridge crossing the muddy Colorado River at 2,480 feet.

About a third of a mile west, I crossed Bright Angel Creek and and went through the lush green Bright Angel Campground at 7 miles before returning to the east side at Phantom Ranch. Taking a cue from people in the camp and at the ranch, I ate some food as I walked through the area. 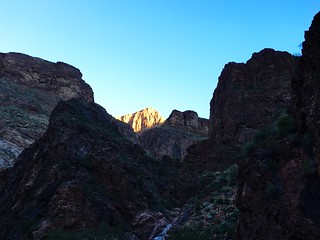 Running northeast from the ranch, I crossed the creek several times as I followed it upstream through a narrow section of the North Kaibab Trail known as The Box. High above, I could see the first sunlight reaching rocky points.

Out of The Box, I passed Ribbon Falls off the west side of the creek and continued up the trail to Cottonwood Campground, about 7 miles from the ranch. Looking back, I still couldn’t see the rest of the Missoula group, and a handful of other runners I encountered along the way said it had been a while since the one person ahead of me passed. 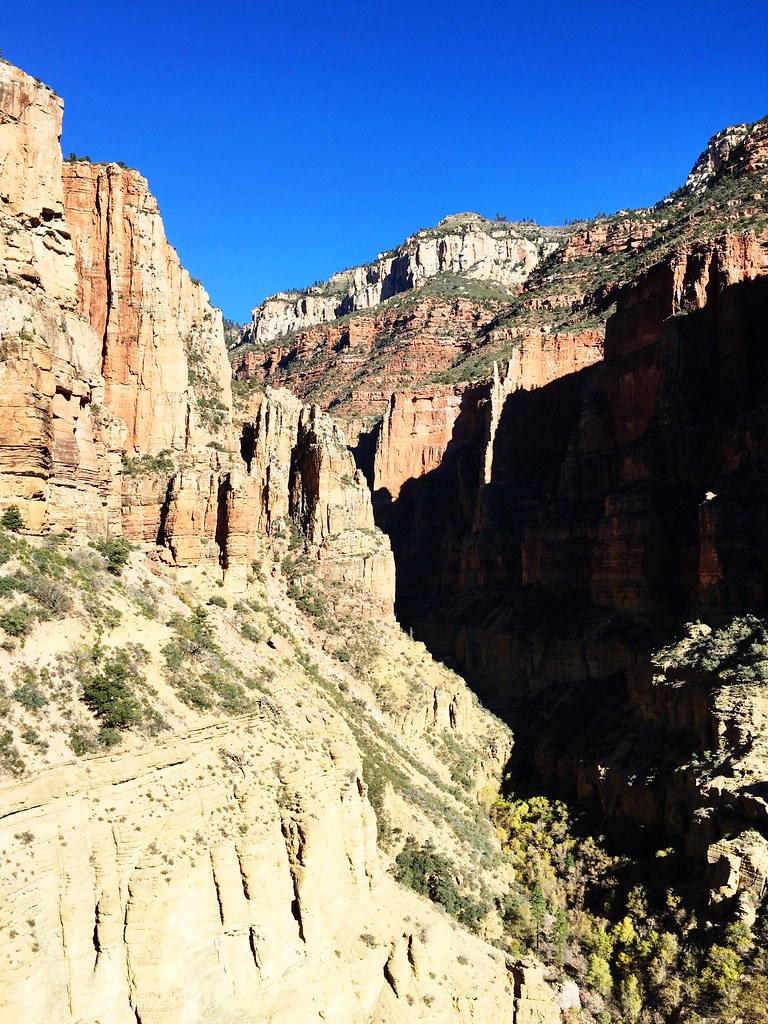 Almost 1.5 miles beyond the campground and after a few small cascades, I crossed the creek at the Pumphouse Ranger Station and the trail began to climb steeply northwest into the Roaring Springs drainage. As the trail rose along sunny cliffs, I passed a group running Rim to Rim from north to south. 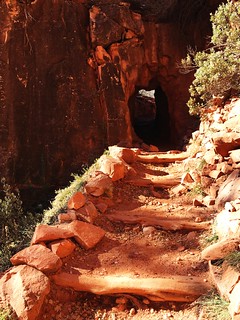 After crossing a bridge and ascending several switchbacks, I reached Supai Tunnel, about 1.7 miles below the North Kaibab trailhead. Above the tunnel, the trail left the cliffs and entered the shade of the forest, where the final switchbacks were covered by a thick layer of snow and ice.

As I reached the trailhead at 8,241 feet and 21 miles from the start, I caught up to a couple of other runners and we chatted as we ate and refilled our hydration packs from an icy spigot.

Just as I was getting ready to follow the other runners back down the trail, three friends from Missoula reached the top, so I waited – it would be nice not being alone on the way back across. 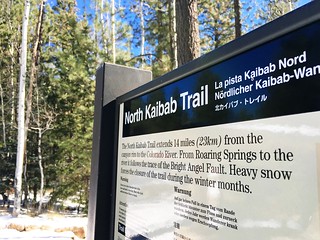 As the four of us started back down the North Kaibab Trail, we passed all the other runners from Missoula who would reach the rim above Supai Tunnel. At the bridge below the tunnel, we passed a few more who turned around based on the time of day.

After that, we descended quickly, one person dropping off as we backtracked through the canyon.

The three of us who remained followed a short side trail across Bright Angel Creek to Ribbon Falls, and as we bushwhacked back we found two other Missoula runners who were extending their Rim to River route.

Across the creek on the main trail again, our group of five continued down through The Box to Phantom Ranch, where we met other Rim to River runners from Missoula and stopped to eat – and drink one of the best cups of lemonade in memory. 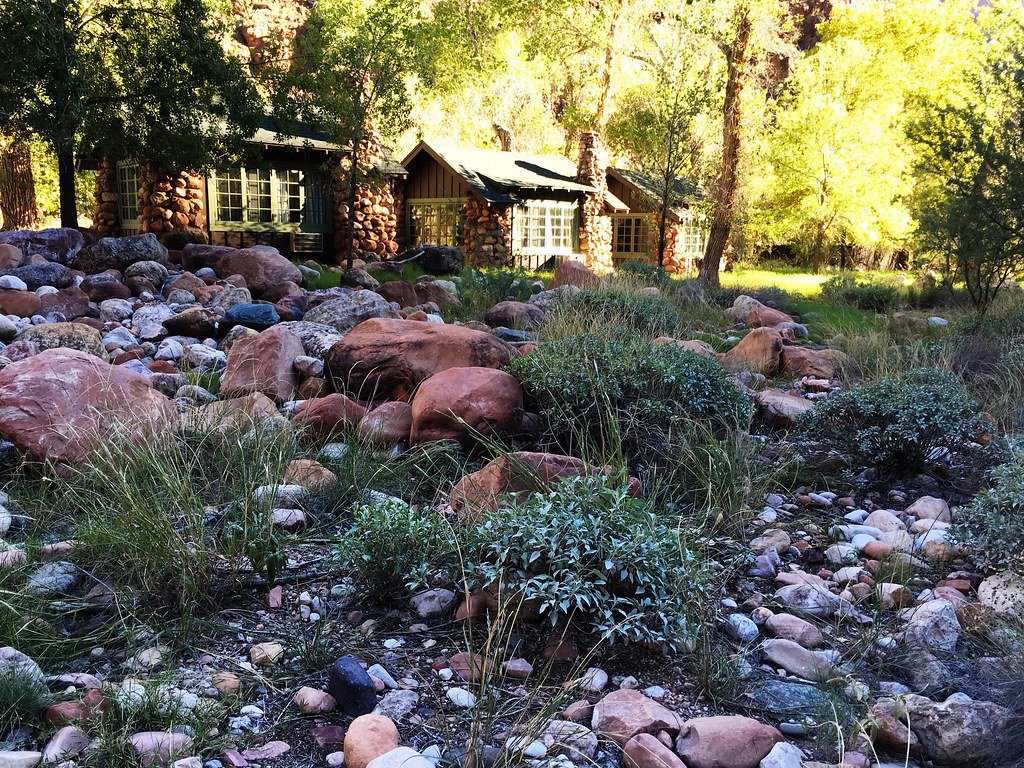 After departing the ranch and campground, one Rim to River runner stayed with the three of us making the double crossing as the others outpaced us up the Bright Angel Trail.

A short distance downriver, we crossed the Silver Bridge to the south side of the Colorado and continued to River Resthouse, 1.5 miles from the campground. There, the trail began to climb. 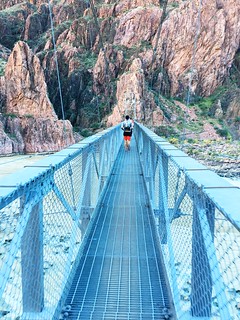 As the daylight faded, we moved steadily up the trail for the next 3.2 miles, through the cottonwoods and cliffs of the Garden Creek drainage to Indian Garden Campground. Noticing I had a signal on my cellphone, I sent Jen a text message updating her on our progress.

Above the campground, we began the arduous ascent of the final steep switchbacks up the cliffs to the South Rim.

After passing the Three Mile and Mile and a Half resthouses, we stopped to put on our headlamps as darkness set in. Looking over the edge of the cliff, a line of lights along the trail below turned our way – we had inadvertently shown other hikers and runners how far up they still had to go.

The final mile was slow, but we still passed numerous hikers on the popular trail. And I pulled ahead slightly at the end, officially becoming the second R2R2R runner from the Missoula group to reach the Bright Angel trailhead, about 46 miles and 13 hours 12 minutes after starting. 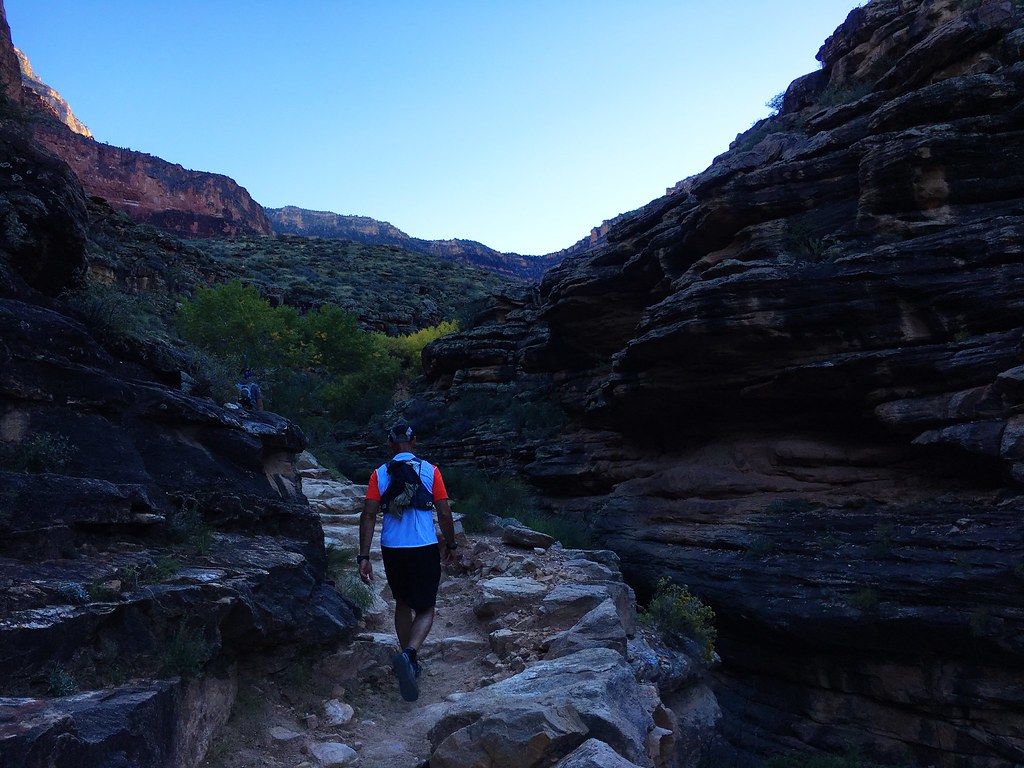 Jen greeted me with news that she made it to the river and back on a toe she broke before our trip, then gathered the four of us who made the final climb out together for a photo.

To our surprise, one friend who we thought would be the final person from Missoula to complete the double crossing was there, too. He had done the run before, and realizing his slow progress this time, got a ride back from the North Rim on one of the last shuttles of the season – which conveniently arrived there about the same time he did.

The next few hours were spent greeting other runners at the trailhead, getting cleaned up in our nearby cabins, and celebrating the day with dinner and drinks at the Bright Angel Lodge.

After breakfast the next morning, Jen and I started driving back north while the others returned to Vegas and celebrated another night before flying home. Talk of making a destination run an annual tradition started soon after we arrived back in Missoula.