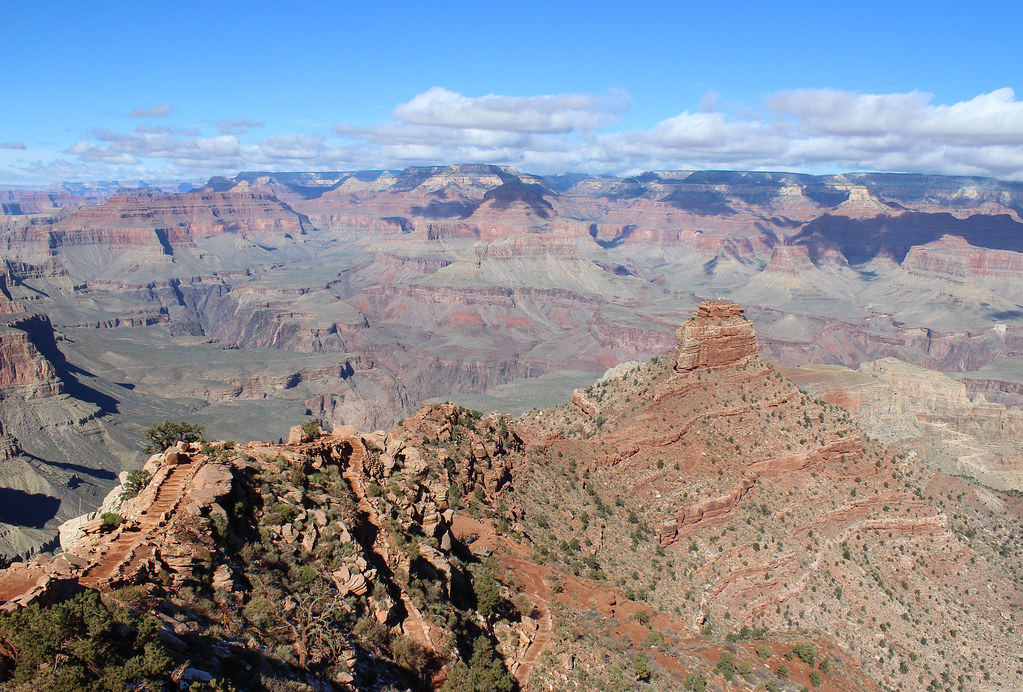 After two days of driving and a stop to hike a slot canyon, we arrived on the South Rim of the Grand Canyon last fall just as the sun was setting. We took in the expanse from the Desert View Visitor Center as the last light of day faded over the rim to the west and darkness overtook the Colorado River below.

The brief view would have to suffice until the next morning as we continued on to our hotel in Tusayan, Arizona, just south of the national park’s boundary. Our trip was several months in the making, so one more night wouldn’t matter.

The planning started when I received an invitation to run Rim to Rim to Rim with a group from Missoula. Jen had been to the Grand Canyon before, but only briefly – and no way would I be going for the first time without her, she said. So while the rest of the group bought plane tickets for a four-day weekend, we opted for a weeklong road trip.

Arriving ahead of the rest of the group, we went hiking and did some sightseeing early in the week – in fact, our hikes ended up being the only time I saw some sections of the Bright Angel and South Kaibab trails in daylight, as the run started and ended in the dark. We also got some on-the-ground updates for the group about trail conditions and water availability on the North Rim. 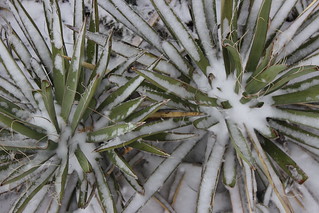 We planned to keep costs down by sleeping in a tent for a few nights before staying in a cabin on the rim at Bright Angel for the run. Instead, we ended up in the hotel because the temperature was too cold – we even had a day of snow.

Below are the hikes we went on before others arrived; the run will come in a separate post. 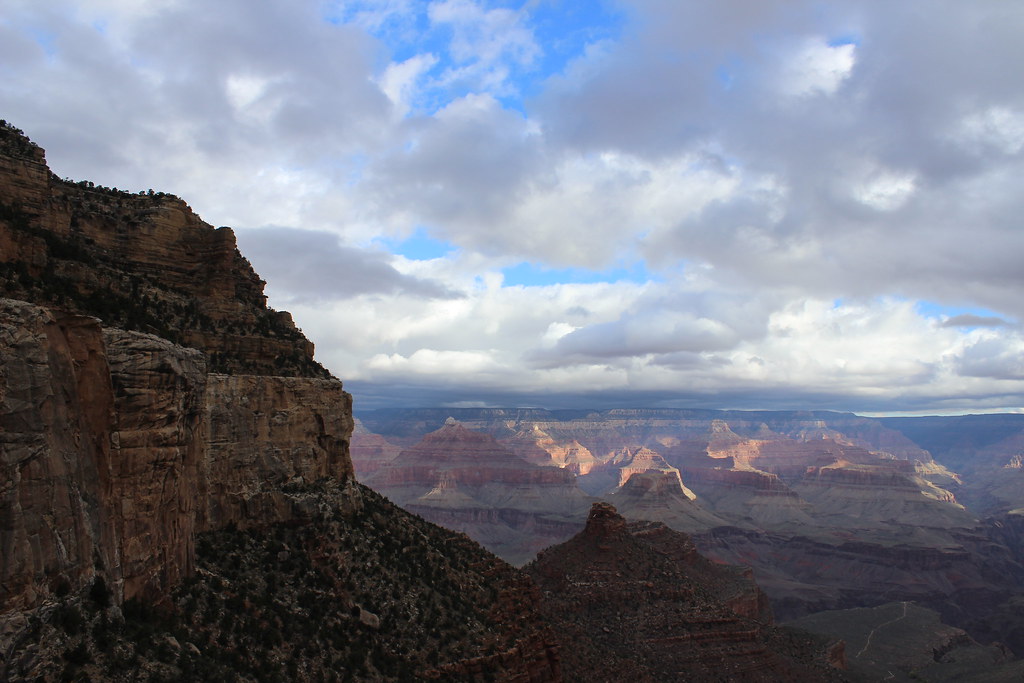 Our first morning in the park – crisp with partly cloudy skies – we started down the Bright Angel Trail from 6,860 feet on the South Rim.

As we descended switchback after switchback northwest between Maricopa and Grandeur points, the temperature rose and we soon removed jackets and pant legs until we were in shorts and T-shirts.

Past the Mile and a Half and Three Mile resthouses, where tourists took breaks in numbers, the switchbacks ended and the trail straightened and became less steep as it reached the Indian Garden Campground at 4.8 miles. 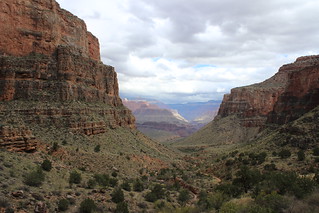 Crossing to the west side of the creek just below the campground, we left behind the crowded main route and continued out a mostly level trail to Plateau Point at 6.3 miles and about 3,100 feet below the trailhead.

The point overlooks the Colorado River as it winds from the confluence with Bright Angel Creek on the east out of sight around a bend to the west. Across the river, many points, buttes and temples – Sturdevant, Johnson, Schellbach, Hillers, Clement Powell, Buddha and Manu – rise to the North Rim. 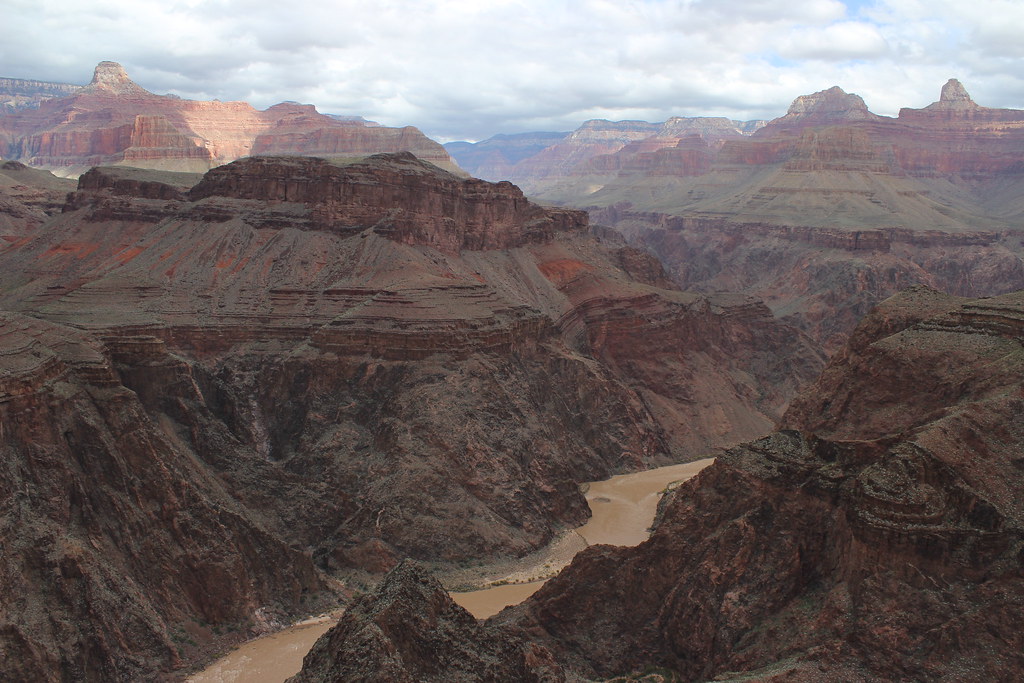 As we hiked back up from the campground, clouds closed in and rain began to fall. We kept our coats off, however, as the climb kept us plenty warm.

Here are more photos from the Bright Angel Trail.

Trailhead: The trail begins a couple of hundred yards west of the Bright Angel Lodge, next to a restroom and mule corral. 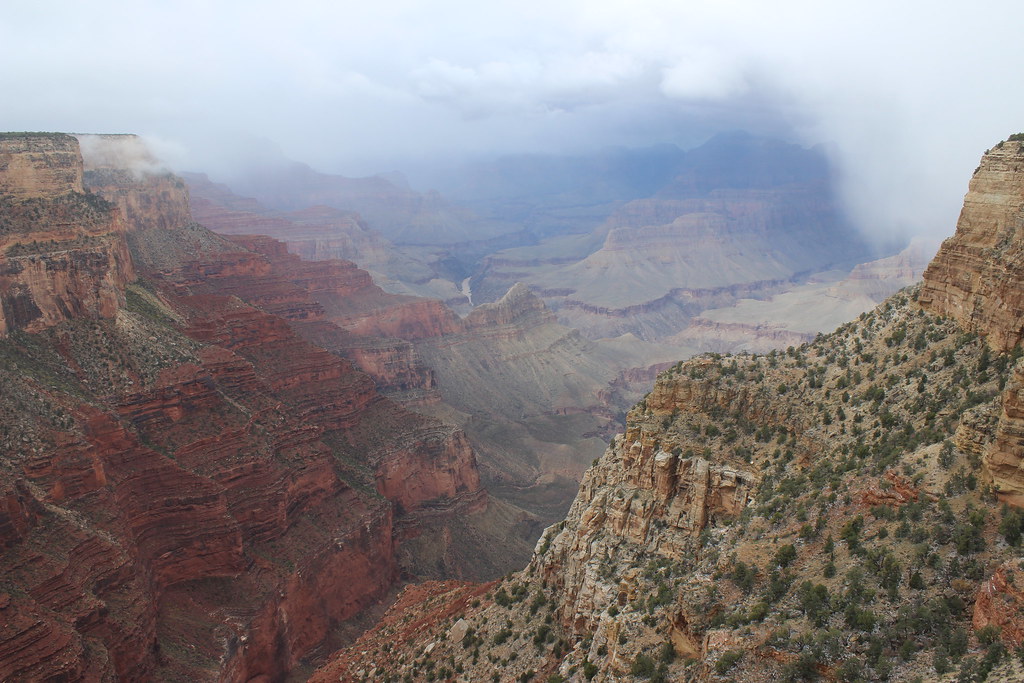 The next morning was considerably colder and the weather was expected to deteriorate, so we decided to take the shuttle bus west to Hermits Rest and walk back to Bright Angel on the mostly level Rim Trail.

Soon after we stepped off the bus, we saw our first snowflakes, and they continued intermittently most of the day.

Walking east on the wide, paved path, we passed plenty of other people in the first 2.8 miles from Hermits Rest to Pima Point then the Monument Creek Vista.

Other hikers became fewer and farther between as the trail narrowed and turned to dirt and gravel, and after about another mile we reached The Abyss, where the rim drops off and the view of the Monument Creek drainage opens up. 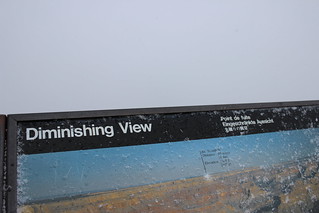 As we arrived at Mohave Point, a little more than a mile east, it began snowing in earnest, with flakes “falling” up the canyon wall on gusts of wind. A sign titled “Diminishing View” at Hopi Point about 0.8 miles farther couldn’t have been more accurate, though it refers to air quality rather than precipitation.

From the memorial to Colorado River explorer John Wesley Powell at Powell Point, another 0.3 miles east, we watched as the clouds broke and revealed Maricopa Point. 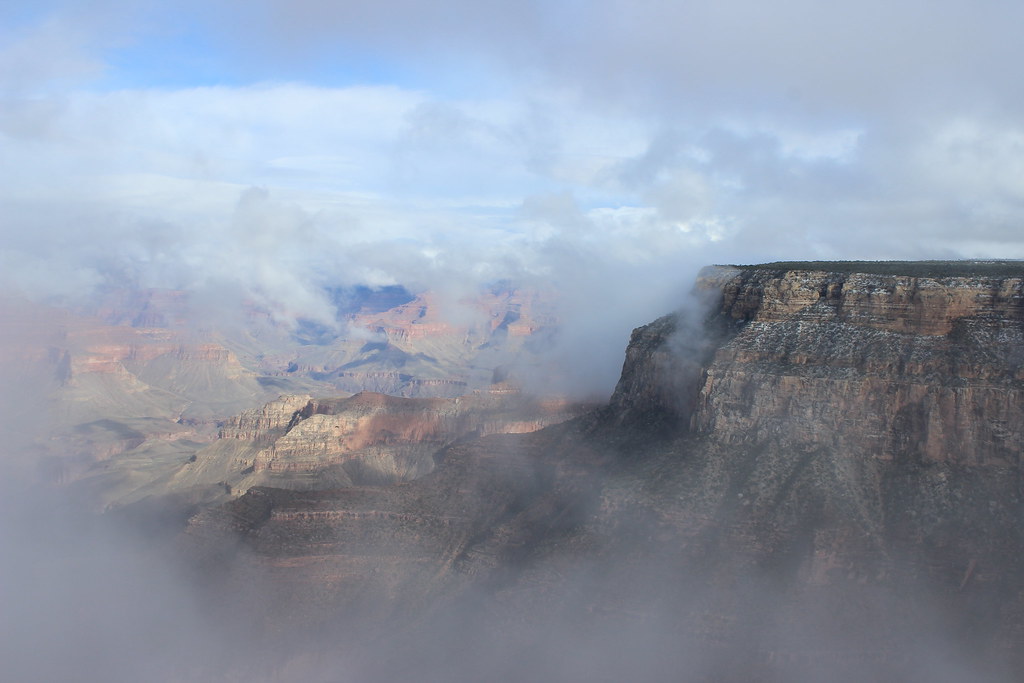 Returning to the paved path, we continued half a mile to Maricopa Point, then 0.7 miles to Trailview Overlook with its views of the Bright Angel switchbacks and the iconic rooftop of the El Tovar Hotel.

After another 0.7 miles and a couple of hundred yards, we finished at the shuttle stop and Bright Angel trailhead.

Here are more photos from the Rim Trail.

Trailhead: We boarded the shuttle bus at the stop a couple of hundred yards west of the Bright Angel trailhead, rode it west to Hermits Rest and hiked back from there. 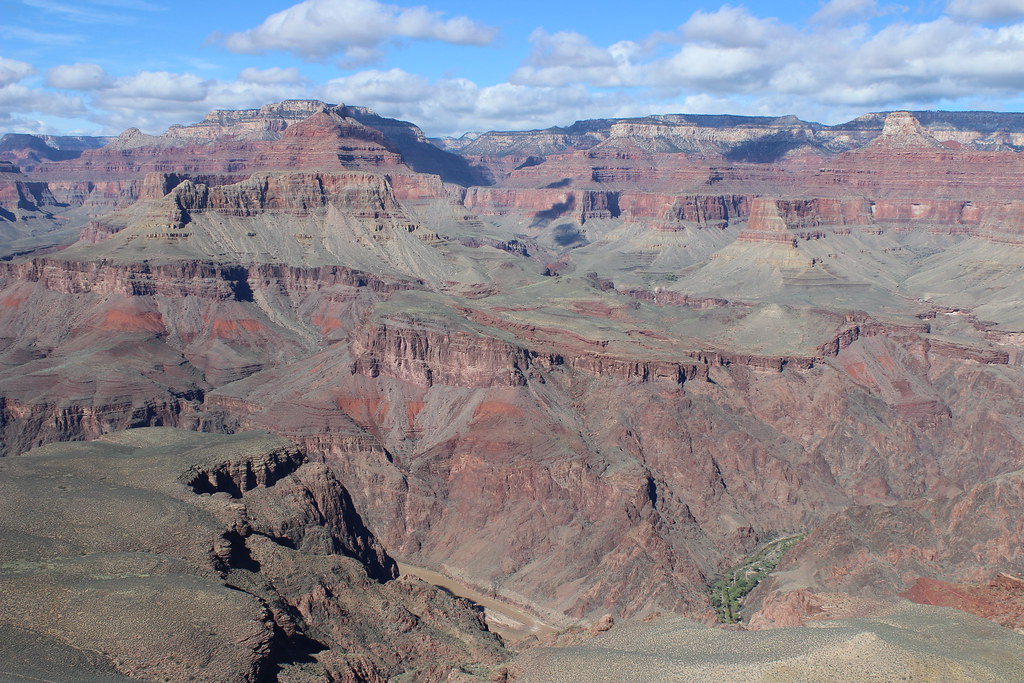 Waking to mostly sunny skies and snow on the ground the next day, we took in the panoramic view at Mather Point before riding the shuttle east to the South Kaibab trailhead at 7,260 feet.

When we started down the trail, the first short switchbacks in the shady canyon were an icy, gravelly mix – both a little slick and offering some grip. Half a mile down, the trail melted as it met the sun and straightened to the north below Yaki Point.

After another set of switchbacks, we arrived at Cedar Ridge, where weathered snags overlook O’Neill Butte at 1.5 miles. 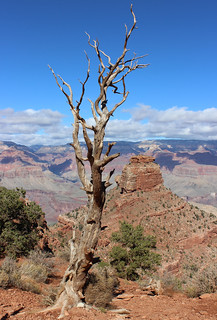 We continued down the ridge, rounding the eastern side of the butte and hiking out to Skeleton Point, at 3 miles and 2,000 feet into the canyon our destination for the day.

From the point, we could see west across to the Bright Angel Trail and Plateau Point and north down to the bottom of the canyon, where a patch of green indicates the location of Phantom Ranch.

Back at the top of the trail, the ice retreated as the sun reached switchbacks. And before leaving that night, we were treated to a gorgeous sunset outside the El Tovar Hotel – with wispy clouds highlighted pink over the North Rim. 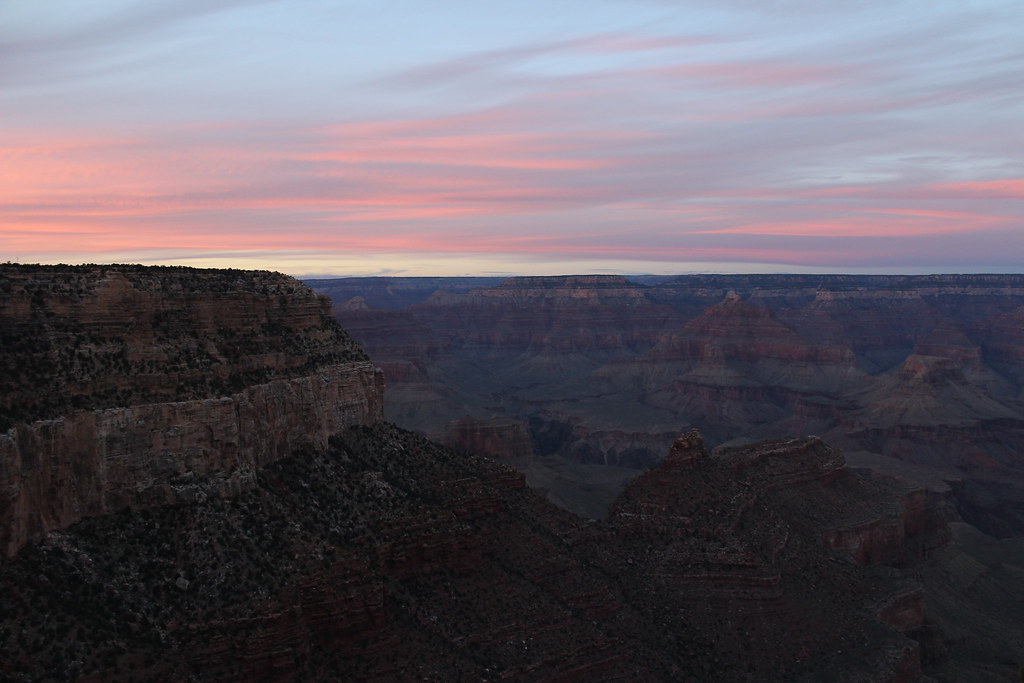 Here are more images from the South Kaibab Trail.

Trailhead: The South Kaibab trailhead is closed to private vehicles, but is easily reached by riding a shuttle bus a few minutes east from Grand Canyon Village.

We spent most of the next day sightseeing east along the South Rim, waiting for the group of runners from Missoula to arrive. Then it was early to bed before the dark start of the Rim to Rim to Rim.